Flutter Live 2018: Everything You Need to Know

On December 4th, the Flutter team held a global Flutter party Flutter Live’18 at the Science Museum in London to share the latest Flutter news and updates. It was heard that bug fixes and stabilization were the main focuses for the release. However, we also heard news about some major enhancements and partnerships.

If you missed out the keynote of Flutter Live, do not worry. We have it all covered here in the blog with the major announcements made during the event.

The Major Announcements of Flutter Live 2018

Flutter 1.0
Flutter Live 2018 began with a major announcement - Flutter is no longer a beta SDK. Google has released Flutter version 1.0 to the thousands of developers and businesses for creating beautiful native apps. Now, it is not just available for early adopters but the whole world. You can opt for cross-platform development to build native mobile app experiences without compromising on User Interface.

Material Components
The Material Design team at Google has created a major expansion in the form of reusable components for Flutter. This makes Flutter more expressive and flexible. And the best part is that the Flutter team has extended their support to Apple iOS design language, Cupertino, as well. Pixel perfect apps are not just a dream but a possible reality with Flutter.

Flare
Flare by 2Dimensions bridges the gap between designers and developers. Flare is a vector-design and run-time animation tool that exports directly to Flutter. With Flare in practice, both the designers and developers can work parallelly to create beautiful native apps. You don’t need to design using a tool and then, develop using another. The details and finesse of the custom-app interface will be seen on your critical business apps, much in the exact way it had begun initially with the design.

Dart 2.1
Dart gives Flutter major advantages. It is one of the fastest growing programming languages. In Flutter 1.0, Dart comes with an upgraded version for smaller, faster, and cleaner syntax. To add more, the code of Flutter is small and compact with the help of open-source packages.

Codemagic Partnership
Nevercode has re-engineered the Continuous Integration and Continuous Delivery (CI/CD) experience with their new product, Codemagic. It is a build system that automatically understands Flutter. With the use of Codemagic, developers can select GitHub repo having the Flutter project, create continuous build flows with tests and upload it directly to the app or play stores.

Desktop Embedding & Hummingbird
When Google initiated Flutter, it was aimed to be a portable UI toolkit. Staying true to the notion, Google extends Flutter beyond mobile. As an early stage project, Desktop Embedding brings Flutter to desktop operating systems such as MacOS, Windows, and Linux.

Hummingbird is an experimental project of Flutter to run its code on the modern standards-based web. Flutter running on the desktop web browser using the same mobile codebase will be soon available to the whole community. 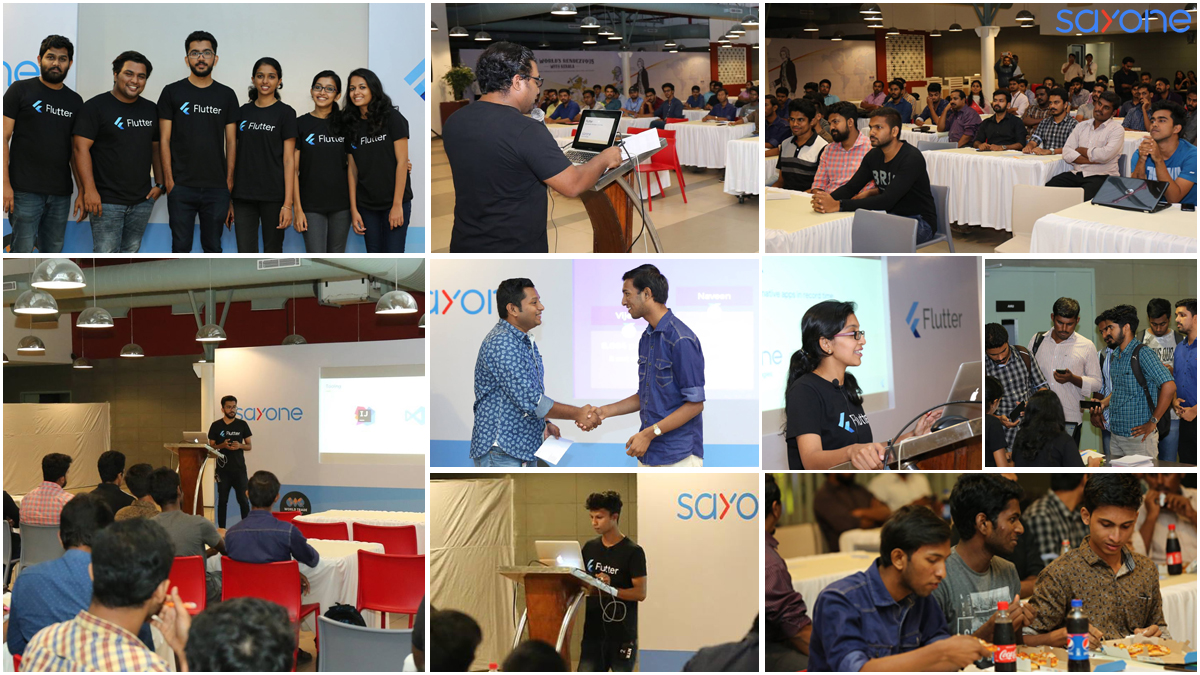 Flutter has always been a community effort. Along with organizing a Flutter party for the technophiles, Google provided early technology adopters like SayOne an opportunity to organize a global viewing party for sharing the joy and enthusiasm of the latest Flutter updates.

Since its inception, the mobile team at SayOne has been closely following and implementing projects using Flutter. As part of this initiative, we were more than delighted to host a global viewing party for Flutter Live 2018 at our India office. Our expectation from the event was to learn more and build a close-knit Flutter community in Kochi.

The event had Flutter enthusiasts in and around Kochi to enjoy the keynote of Flutter Live with complimentary pizza, refreshments, and Flutter T-shirts. In addition to this, the developers from our Flutter team presented a brief session on Flutter along with an environment familiarization and codelab.

The viewing party opened up a platform to bring the Flutter bugs under the same roof and further inspire ourselves to continue on the path of Flutter adoption!

Are you a Flutter enthusiast? You might find these topics interesting: Top 5 Benefits of Flutter for Businesses, How to build iPhone Calculator using Flutter, How to do Asynchronous Programming in Flutter with Dart