Flutter 1.2: What’s new in this release?

Mobile cross-platform development has reached a new dimension with the introduction of Flutter. Since the team at Google released Flutter 1.0 in last December, the buzz has been never-ending. And as we talked and debated about the recent entrant, Flutter 1.2 is out!

Flutter 1.2 is the first feature update for Google Flutter. It was released on February 26 at the Mobile World Congress held in Barcelona. So, let’s see what’s new this time! 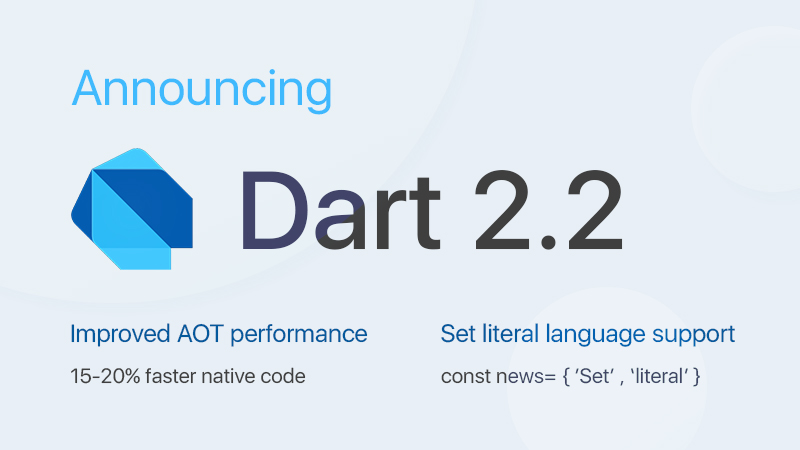 The use of Dart has proven to be a major game changer for Flutter. The performance enhancements offered by Dart for Flutter apps is huge. Keeping this in mind, the new Flutter release includes Dart 2.2 SDK for faster performance.

In Dart 2.2, they have specifically focussed on improving the performance of the Ahead Of Time (AOT) code. Developers can see an improvement in performance by 11-16% on microbenchmarks. With Dart 2 Common Front-End (CFE), it has become easy to build new language features. An example is the introduction of a Set literal language feature. Developers can now write Set literals using { }.

Read more: Flutter vs React Native - The framework you should choose in 2020

Flutter promises pixel-perfect designs on iOS and Android. To fortify their promise on providing native apps, Flutter has brought significant improvements in its Material and Cupertino widget sets to fool-proof the UI side.

As we dig deep down, it can be noticed that attention to minor details has been heavily implemented. They have extended their support to floating cursor text editing for a faithful UI representation. New animation easing functions are the other notable changes making Flutter more impressive. New keyboard events and mouse hover support have also been introduced to support desktop-class operating systems.

In-App Purchases and Android App Bundles are supported in Flutter 1.2. The new Android App Bundles help to reduce app size and enable new features such as dynamic delivery for apps. As exciting as it sounds, the Flutter team has also carefully carried out many bug fixes for maps, video player, and webview.

One of the major benefits of using Flutter is its flexibility. The programming language has been supporting various developer tools such as Visual Studio Code, Android Studio, etc right from the initial days.

Flutter 1.2 has a new web-based set of programming tools to make the developer’s life easy. The tools include Widget inspector, Timeline view, Source-level debugger, and Logging view. These tools can be installed along with the other extensions and plug-ins for Visual Studio Code and Android Studio.

Read more: Why we chose Flutter for Mobile App Development?

Also read: How Much Does It Cost to Develop and Maintain a Flutter App?

Flutter 1.2 promises improved performance, quality, and stability. The first update release polishes the visual finishes and functionality of existing widgets. As the Flutter talk continues, the team at Google has been looking for ways to improve the technology.

So, what can we expect next? Flutter beyond mobile is already in progress with the Hummingbird release. Stay tuned for more Flutter updates!

How To Do Agile Web Development That Works?

How To Handle Post Development Phase Of Your Web Application

Flutter Live 2018: Everything You Need To Know

5 Ways To Maximize Your App Revenue

How Much Does It Cost To Develop And Maintain A Flutter App?

Things To Know Before Building A React-Native App

How We Built The Best Vacation Rental Property Management Software

How A Mobile-First Approach Influences Business Growth In 2019?

How Android Pie Is Going To Transform Your Business Applications

Is your eCommerce Personalized?

Download the FREE eBook on The complete guide to eCommerce Personalization to deliver a shopping experience that makes your customers feel like you know what your customers want.