Kubernetes, a container orchestration tool, is the natural platform option for microservices architecture as it enables dynamic allocation of resources depending on the increase in system demand.

The container orchestration tool Kubernetes (K8s) was originally developed by Google for managing all the company’s containers and cloud services. Subsequently, the Cloud Native Computing Foundation, which released it as an open-source system, maintains the project currently. Today, K8s not only orchestrate a vast majority of microservices available on the market but also manages several cloud services. The key features of K8s are:

Before we discuss the benefits of using Kubernetes for microservices, let us clearly understand the difference between the two.

As mentioned above, Kubernetes is a software suite that enables orchestration, scheduling, automation, and control of various administrative functions within both small and large scale container environments. K8s allow developers to create an environment and promote it across development, testing, and production environments without sacrificing environmental parity. This functionality enables companies to maintain consistency across the entire deployment.

Kubernetes and the container ecosystem are fast becoming a platform for general-purpose computing. The platform and the ecosystem can even rival virtual machines, or VMs, as the building blocks of today’s cloud infrastructure as well as applications. The ecosystem even enables organizations to deliver high-productivity Platforms-as-a-Service (PaaS) that are capable of handling multiple infrastructures- and operations-related tasks and problems related to cloud-native development, enabling development teams to focus on coding and innovation. Amazon, Google, IBM, Oracle, Red Hat, Microsoft, SUSE, VMware, and Platform9 offer infrastructure as a service (IaaS) wherein Kubernetes is deployed or Kubernetes-based platforms.

Microservices, which consist of everything from the operating system to the framework, platform, runtime, and dependencies, are packaged into one executable unit. On the other hand, containerization refers to the capability to isolate processes within the kernel of the operating system. This allows the operation of multiple isolated processes on one server and makes it easy for administrators to manage the applications that are run as a service in the container environment.

This is advantageous because running several servers for one application is an expensive and time-consuming proposition. Orchestrating all these is a challenging task, especially with containers. Managing functions from shopping carts, add to cart, checkout, catalog items display, customer lookup, etc., individually is really a headache. That’s when Kubernetes for microservices becomes helpful.

In light of these aspects, let us discuss the following questions:

Is Kubernetes Good for Microservices?

The biggest reason Kubernetes is good for microservices is that it easily segregates configuration from orchestration. As Kubernetes originated from the ‘Borg’ project of Google, it brings with it a certain level of sophistication. Apart from the fact that K8s functions natively with microservices, it is a great way to organize both basic and complex microservices architectures without much difficulty. Having said that, the benefits of using K8s for microservices are:

Can We Deploy Microservices in Kubernetes?

There is no doubt about the fact that microservices have become a standard development practice for developer teams that want to quickly release reliable complex systems. On the other hand, Kubernetes is the natural platform option for microservices as it has the ability to handle the orchestration needed to deploy several instances of multiple individual microservices. In addition, the service mesh technologies move common networking issues from the application layer to the infrastructure layer. This makes it easy to secure, log, route, and determine network traffic.

Are Docker and Kubernetes Microservices?

This is a question that naturally arises in the minds of those who have started learning or reading about microservices and related aspects. Understanding the relationship between Docker, Kubernetes, and microservices will provide you with the answer to this question.

Microservices, a software development technique, organize an application as a set of services that are loosely coupled. The microservices architecture enables the deployment of complex, large applications and helps grow an organization’s technology stack. In this architecture, software applications are developed as independently deployable, small services wherein every service takes care of a process by communicating through a lightweight mechanism and serves a business goal, aim, or objective. As such, the microservices architecture is a variant of the service-oriented architecture (SOA) development trend with restrictions such as the size of the service, storage isolation, release independence, teams, and stacks, among many other things. Furthermore, microservices are frequently packaged into VMs for running services. These packaged services can be managed with the help of Kubernetes, which is a container manager.

As the microservices architecture advocates breaking down an application into many less complex tasks, they need to communicate with each other to enable various functions of an organization. Though Kubernetes mostly enables the deployment of these services, it also enables the communication between these small applications. 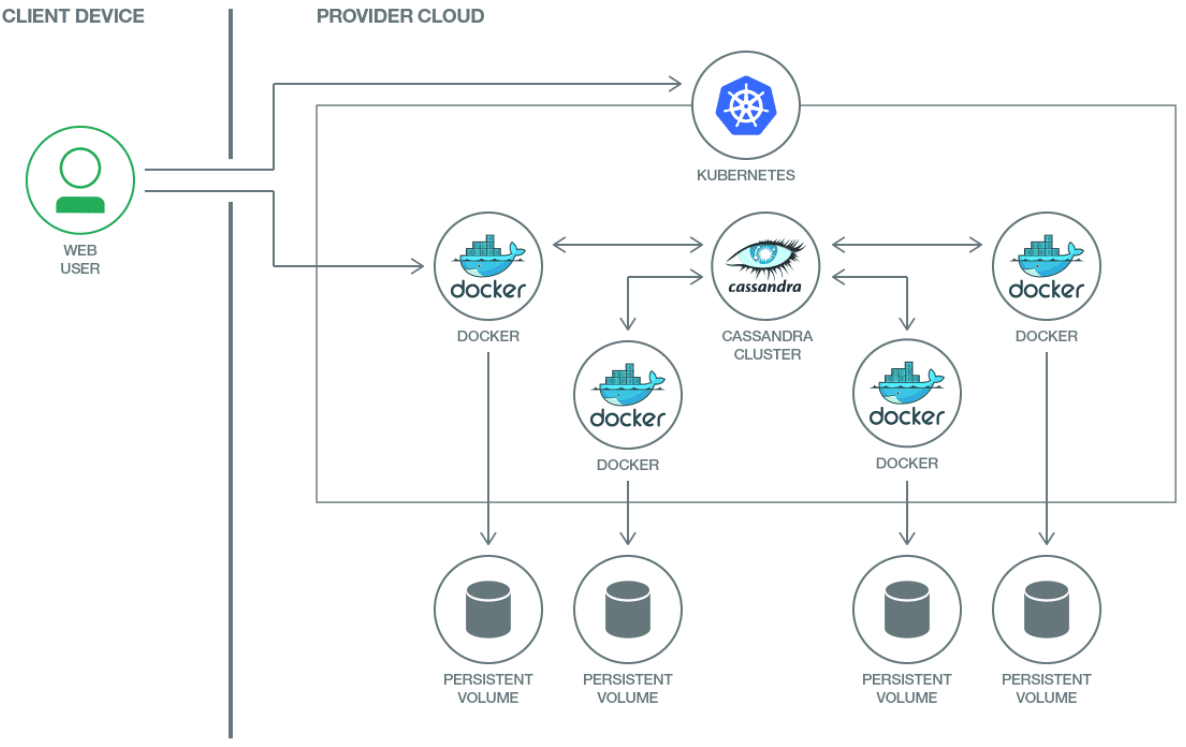 By default, Kubernetes makes use of Docker for running images and managing containers. This is because it is easier to configure Kubernetes, a more mature and functionality-rich analog, into the Docker Swarm. Besides, the container system Docker makes it easy to deploy microservices and even eliminates the need to use virtual machines to host them. As such, Kubernetes provides the infrastructure for container manipulation.

In Kubernetes, the execution environment is conceptualized by using several terms. The smallest unit that can be deployed in Kubernetes is a pod. It has volume, memory, unique ID, and networking requirements. A set of permanent pods in the cluster make a service. Docker allows the creation of infrastructure prerequisites faster by containerizing an application. Microservices in Docker containers can be easily administered by a DevOps team. This is the main reason why many enterprises have adopted the microservices architecture along with infrastructure standard technology. This enables deployment and standardization of releases but keeps development small, independent, and focused.