Microservices, an architectural style, structure a large application as a set of highly maintainable, testable, and loosely coupled services.

What is a Microservice Application?

The microservices architecture is a software development approach wherein a single application consists of a set of small services. Each microservice runs its own process and communicates with lightweight mechanisms (often APIs). These services, built around business capabilities, are independently deployable with the help of fully automated machinery. Centralized management of these services is very minimal. Furthermore, the services can be programmed using different languages. Again, it is also possible to use varied data storage technologies.

Besides, the process involved in adding or removing functionality within microservices architecture is less painful compared to that related to a traditional monolithic application wherein it is difficult to untangle the services that comprise the performance of the monolith. Initially, developers may be able to add new code to the existing code, but upgrading a monolith becomes increasingly difficult without shutting down the entire program as it often grows too complex over time. Breaking a monolith application into component functions leads to the development of a microservices application. Thus, redesigning a monolith as a set of loosely-connected microservices enables developers to avoid the challenges and delays experienced while upgrading an application later on.

Read our blog “Top 5 Microservices Trends to Take Note of in 2022”.

Features of a Microservice Application

What are the 3 Components of the Microservices Architecture?

The three key components of the microservice architecture are:

The microservices, the self-contained smaller services, form the main component of this architecture. They can be created in any language and they function independently of each other. This makes implementation easy through different software teams.

Apart from offering an additional layer of infrastructure, the service mesh enables extra security and ensures a more predictable behavior as far as communication is concerned. Moreover, the service mesh makes use of a sidecar pattern and sidecar proxies to enable dynamic messaging. This setup, in turn, allows developers to avoid using code when building parts of an application.

The API gateway is an essential and integral part of the microservices architecture as it enables the communication between services.

Download our ebook “Modern commerce - It's an evolution from the monolith to microservices”.

Start your microservices journey today! Give us a call!

What are Microservices in Programming?

When it comes to microservices application development, there is a lot of flexibility with respect to programming languages that can be used. Developers can use a programming language of their choice to develop microservices applications. However, it is best to choose a language that is helpful in meeting project goals to ensure enhanced development efficiency.

Python: When there is a need to write clean code, Python is the best choice. This interpreted language enables ongoing changes and builds APIs using web protocols like HTTP and toolkits for the discovery and manipulation of remote objects. Other features include faster prototyping and adaptability to older programming languages ​​like PHP.

Ruby on Rails: This programming language is popular because of the flexibility, scalability, code quality, and speed of development it offers. Furthermore, the object-oriented language supports all major platforms and is compatible with other languages, inheritance, and garbage collection. Ruby is best suited for both start-ups and large enterprises.

In 2007, Netflix launched its movie-streaming service. By 2008, the OTT platform was facing severe service outages as well as scaling challenges. In the same year, Netflix started shifting to the cloud platform when it experienced serious database corruption. For three days, Netflix struggled to ship DVDs to its members. This prompted it to move highly reliable, horizontally scalable, and distributed systems into the cloud.

The process of refactoring the monolithic architecture began in 2009 and as the first step moved its non-customer-facing movie-coding platform to the AWS cloud. The entire process of migrating to the microservices architecture was completed by 2012.

Looking for the best microservices vendor? Give us a call today!

At SayOne, we offer independent and stable services that have separate development aspects as well as maintenance advantages. We build microservices especially suited for individuals' businesses in different industry verticals. In the longer term, this would allow your organization/business to enjoy a sizeable increase in both growth and efficiency. We create microservices as APIs with security and the application built in. We provide SDKs that allow for the automatic creation of microservices.

Our comprehensive services in microservices development for start-ups, SMBs, and enterprises start with extensive microservices feasibility analysis to provide our clients with the best services. We use powerful frameworks for our custom-built microservices for different organizations. Our APIs are designed to enable fast iteration, easy deployment, and significantly less time to market. In short, our microservices are dexterous and resilient and deliver the security and reliability required for the different functions. 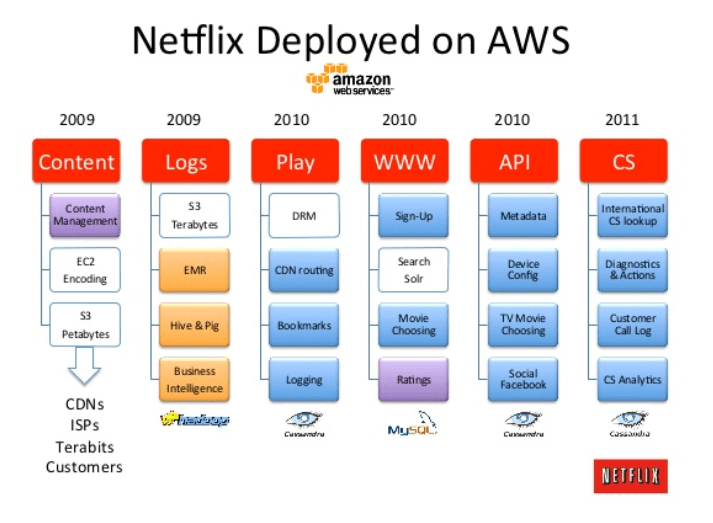 Refactoring to microservices enabled Netflix to overcome the service outage problem and scaling challenges. By 2015, the API gateway of Netflix was handling as many as two billion daily requests and was managed by more than 500 cloud-hosted microservices. By 2017, the number of loosely coupled microservices increased to 700. Today, Netflix streams nearly 250 million hours of content every day to more than 139 million subscribers in as many as 190 countries. Netflix continues to grow!

In conclusion, moving over to the microservices-based architecture is the best option for an organization that wants to grow big faster.