How Kubernetes Changed The Face Of The Cloud

Since the year 2015, containers and Kubernetes were two major trends that started to change the face of the hybrid cloud.

Kubernetes, an open-source platform, is widely used for automating computer application configuration, deployment, and scaling. Let us attempt to understand why Kubernetes was introduced in the first place.

How Kubernetes Changed The Face Of The Cloud 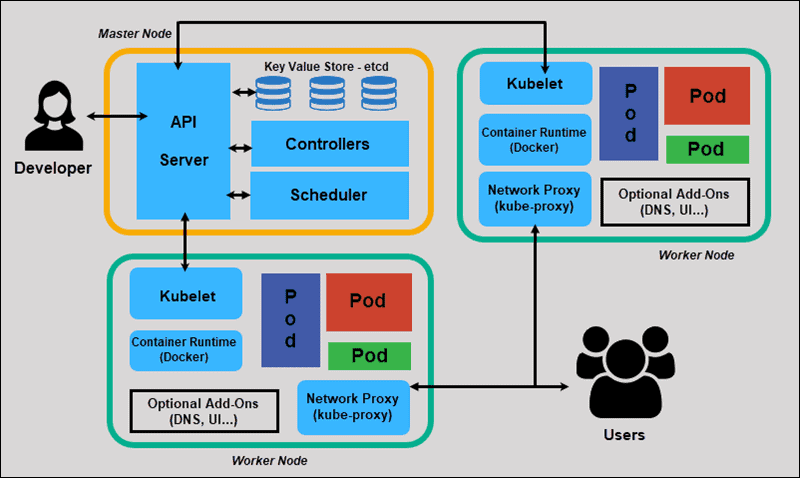 The initial configuration was such that it allowed organizations to work on physical servers alone. Here, the servers had no boundary separation facilities and when the server resources were allocated to multiple applications, one application would take up more server space. This led to disparities in allocation. The result was more advanced virtual machines (VMs). Here, the system ensured that multiple VMs were run on the same physical server CPU.

VMs had well-defined boundaries and this was a great advantage that also provided a sense of security. However, each of these VMs had its operating system and its own set of hardware, thus making the platforms heavily loaded. To overcome this problem, containers were added to the platform. Containers have slightly relaxed boundaries that allow the applications to share the operating systems.

Whereas containers prove to be an effective way of running applications, a major challenge is that they require a solution to run in a production environment. The containers have to be continuously monitored and managed to ensure the continuity of the services.

The system has to be continuously monitored to ensure that it is not experiencing any downtime, for otherwise, the process of running and scaling containers in the production environment becomes a tricky job.

Kubernetes was introduced to solve this complex problem. Kubernetes helps to manage the distributed container system in an effective manner, running and scaling the containers while simultaneously taking care of downtime quickly. Kubernetes can provide these advantages because of characteristics such as load balancing, configuration management, storage orchestration, and automated rollouts, among others.

Read our Blog “How to hire microservices developers from other countries”.

Kubernetes’ design and development procedures were initially influenced by the infrastructure of Google Borg. A majority of Kubernetes’ developers and contributors had previously worked with Google Borg. Google Borg can be considered to be the predecessor of Kubernetes which essentially incorporates four different ideas from Borg. These include:

Kubernetes, an open-source platform, is popular because its support system, services, and tools are openly available.

Amazon Web Services uses Kubernetes’ services extensively for hosting different applications and systems on the cloud. However, before Kubernetes, AWS ran its apps in a different manner. The methods of handling cloud server space were outdated. This practice gave rise to many challenges. Some of the features and configurations that AWS used (before Kubernetes was introduced) are as follows:

Amazon Web Services makes use of VMs to run apps on the cloud. Here, multiple VMs run in the CPU of one physical server. This provides an extra layer of security. Here, the VM platform used refers to Amazon EC2.

EC2 runs multiple VMs on the cloud and these virtual machines, in turn, run different computer applications. EC2 provides virtual computing environments, more commonly referred to as instances. However, a major drawback of this method is that the server becomes very heavy. Each VM running on the server has its own set of OS and hardware components. Because of this, it is a challenge to manage the VMs on Amazon EC2.

AWS helped to run applications via the use of VMs. However, with this method, though it was able to provide free services in the beginning, they were chargeable in the long run. This brought in strict boundaries when it came to using apps. This was also not suited for use in the currently possible cloud services.

Kubernetes changed the whole concept because it is open source and has a wide application. Users have free access to its tools and the setup allows maximum users to benefit from the interface.

Download our eBook, "Choose the best microservices vendor and trim the costs."

We believe in long-term win-win relationships with our strategic partners. If you want to migrate to microservices, call us today!

AWS users also faced many issues if they decided to move to an alternate cloud services provider. The cloud services were based on the long-term commitments of the clients. Moving in and out of AWS was also a tedious and extended process. This was a big drawback and Kubernetes did away with all of these requirements.

The cloud environment comes with hundreds to thousands of varied components that include operating systems, hardware, virtualization, storage, networks, data security features, etc. Interoperability is the capability of working in sync with all these different components when users moved to a new platform. However, AWS users commonly experience interoperability problems when they use a new platform.

Kubernetes is popular ever since 2014 when Google released this portal. It is an open-source platform and found many applications among cloud users. Kubernetes has gained immense popularity and is now the primary choice for a majority of cloud service providers.

For instance, AWS’ Elastic Kubernetes Service (EKS) is a very reliable solution that Kubernetes offers. This is a managed Container as a Service (CaaS) setup for you if you are a basic AWS user. Google Cloud Platform Kubernetes Engine is another popular cloud service provider that makes use of Kubernetes.

The managed container platform comes has set up good records for uptime performances. It also has a marketplace to deploy applications. Google Kubernetes engine also has very good security features.

Many organizations worldwide are now trying to run their apps on the Kubernetes platform. The major reason for this is that when you use this platform, you can reduce the time to market because of improved app development efficiencies. This also allows for IT cost optimization via reduced infrastructure costs and efficient development practices. Another important reason is that Kubernetes allows improved scalability. It can automatically scale and improve app performances.

A major factor that contributes to Kubernetes’ success and its high user rate is the flexibility it offers with different cloud providers. Kubernetes and its containers, therefore, allow you to work on a multi-cloud platform and you can run your applications when there is a combination of cloud platforms. This also means the use of public and private clouds. The biggest advantage here is that the workload gets balanced across two or more cloud platforms.

The next advantage is that Kubernetes ensures a seamless migration from one cloud service provider to another. If you have used a specific cloud provider with Kubernetes and wish to make a change to another platform, it can be done very smoothly.

Kubernetes - The Future Of The Cloud

Kubernetes has changed the perception of the cloud and has gone through a period of immense growth. Kubernetes has almost become the core of all modern software. It has effectively managed to change how software and applications are deployed on the cloud.

Irrespective of what the core business is, every company is embracing the concept of digitalization. Cloud technology has been able to provide companies with opportunities for rapid growth beating the competition.

Kubernetes infrastructure for the cloud platform allows different teams across companies to work both efficiently and independently. This has helped to realign and streamline business goals for these organizations. Thus, for most organizations, Kubernetes is the de-facto standard for orchestrating and managing containers for cloud deployment and related operations.

Kubernetes has highly transformative features and, for this, has instilled two very important upgrades that manage the cloud interface operations. This allows for higher responsiveness and more self-healing capabilities. Using these, Kubernetes makes it easier for anyone to develop container-based models and apps.

Building tools based on Kubernetes’ principles leads to a higher level of abstraction for cloud service providers paving the way for multiple benefits for an organization such as less time to market because of improved infrastructure. It also helps team members to focus on core business requirements without worrying about infrastructure or other operations.

Kubernetes does not just modify how applications are deployed over the cloud. The best advantage of using Kubernetes is that its tools allow for the modernization of the architecture. Kubernetes has also made these orchestration tools available to the organizations that use Kubernetes and changed the basis of cloud platform deployment.

Also, more often than not, proprietary cloud servers are limited to a single system only. As a result, if the user employs the technology on one computer, it is unlikely that this service extends to other systems unless the license allows for it. This has a major disadvantage for those using cloud services.

Kubernetes made the technology open source and removed the licensing fee requirements from the process, paving the way for smoother operations on cloud technology. It facilitates the process of smoothly transitioning from one cloud service provider to another. Organizations can now work with multiple cloud platforms at the same time and also shift to a different interface if the current environment does not suit their requirements. Easy portability ensures that business operations are not hampered in the shift. This is one of the key highlights of Kubernetes technology.

Improvements in cloud technology have helped enterprise growth and business transformation. The future aim of Kubernetes is to break the barriers between the different cloud service providers and make this particular technology universally accessible at higher levels.

Do you want to deploy, manage, and scale up your mobile/on-premise/cloud microservices applications? Call us today!

At SayOne, our integrated teams of developers service our clients with microservices that are fully aligned to the future of the business or organization. The microservices we design and implement are formulated around the propositions of Agile and DevOps methodologies. Our system model focuses on individual components that are resilient, fortified, and highly reliable.

We design microservices for our clients in a manner that assures future success in terms of scalability and adaptation to the latest technologies. They are also constructed to accept fresh components easily and smoothly, allowing for effective function upgrades in a cost-effective manner.

Our microservices are constructed with reusable components that offer increased flexibility and offer superior productivity for the organization/business. We work with start-ups, SMBs, and enterprises and help them to visualise the entire microservices journey and also allow for the effective coexistence of legacy systems of the organization.

Our microservices are developed for agility, efficient performance and maintenance, enhanced performance, scalability, and security.