Which Country Has The Best Computer Programmers And Developers?

Are you thinking in terms of building a career as a computer programmer? If yes, it is natural for you to wonder as to which country in the world produces top programmers and developers.

Which Country Has The Best Computer Programmers And Developers?

It is normal for people to think that the United States – home to luminaries like Bill Gates, Dennis Ritchie, Ken Thompson, and Donald Knuth – has some of the best programmers and developers in the world. Further, India is known to have the fastest-growing developer population in the world and Russian hackers are considered to be very effective. HackerRank examined the data they have collected over time to determine as to which countries performed the best at their coding challenges to answer the question “which country has the best programmers and developers?”

HackerRank is known to regularly post thousands of challenges for developers to write new codes and improve or hone their skills. Developers from around the globe participate in these challenges in multiple programming languages as well as knowledge domains ranging from Python to algorithms, security, and distributed systems. As part of the study, HackerRank ranked more than 1.5 million developers based on factors such as accuracy and speed.

The HackerRank study that China and Russia had the most talented programmers and developers. Developers from China outscored programmers from other countries not only in mathematics but also in functional programming and data structure challenges. The Russians dominated in algorithms, the most popular and competitive area. The US and India had the most number of competitors on HackerRank, but they were ranked 28th and 31st, respectively, in terms of talent.

According to the study, the test type posted by HackerRank that was most popular among developers was algorithms. HackerRank allows developers to participate in coding challenges in as many as 15 different domains. Popularity was determined based on the proportion of tests completed from each domain. 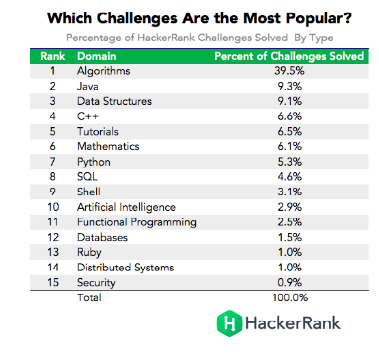 The most popular test type was algorithms with 39.5 percent of the developers competing and challenges included data sorting, dynamic programming, keywords searching, and other tasks based on logic. For tests in this domain, developers were allowed to use the language of their choice, which partially the reason for its popularity. In addition, algorithms are crucial when it comes to coding interviews. That could be one other reason as to why more coders were interested in practicing algorithm challenges.

Ranking of Countries Based on Programmers’ Score

In order to determine the programmers from which country bagged the highest ratings, HackerRank looked at the average score across domains for each country. The scores were standardized for each domain. This was achieved by subtracting the mean score from each score and then dividing it by the standard deviation (referred to as a z-score) before determining the average. The z-scores were converted to a scale of 1-100 to make interpretation easy. Only data from 50 countries that had the most number of developers on HackerRank were considered. 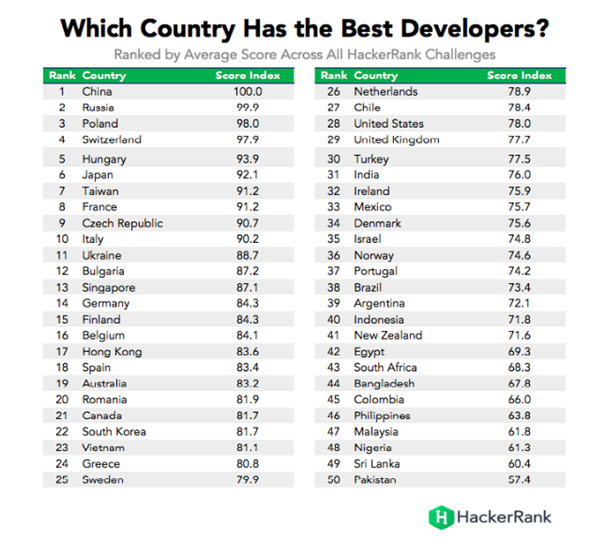 China barely edged out Russia to grab the #1 spot for the overall best computer developers on HackerRank. When considering specific domains, China topped the chart in data structures, functional programming, and mathematics.

News about hackers from Russia has been doing the rounds for quite some time now. It is, therefore, not surprising at all when this country put up a strong performance in algorithm challenges posted by HackerRank. Russia was ranked #1 in the algorithms domain, which was also identified as the most popular test type on HackerRank’s site.

Developers from Poland excelled in Java challenges on the HackerRank site. Java was also the most preferred language among HackerRank users. Like some of the nations in the world, Poland also has included coding classes for school students.

Among the 15 domains on HackerRank, Switzerland has been able to achieve the #5 rank in nine. This makes the developers from this country to be one of the most dominant across the board. Switzerland was also ranked #1 in the Global Innovation Index 2016 report.

Hungary is ranked #5 among countries that produce the best developers and programmers. The country tops the world in completing tutorial challenges. Hungary is by far the first country in the European Union to include computer programming courses in primary as well as secondary schools.

When it came to artificial intelligence (AI), Japan bagged the spot. This is not at all surprising as the nation is known for making great strides in the development of AI.

Taiwan is ranked #7 as the programmers from the country performed well in the database, algorithm, data structure, and functional programming domains. Python was their favorite programming language.

The Czech Republic dominated the shell scripting challenges. The country also ranked second in the mathematics domain. These skills enabled the nation to clinch the #9 spot on the best programmers list.

Italia developers were specifically good at completing tutorial and database challenges. They ranked second in both these domains.

Ranking of Countries by Domain 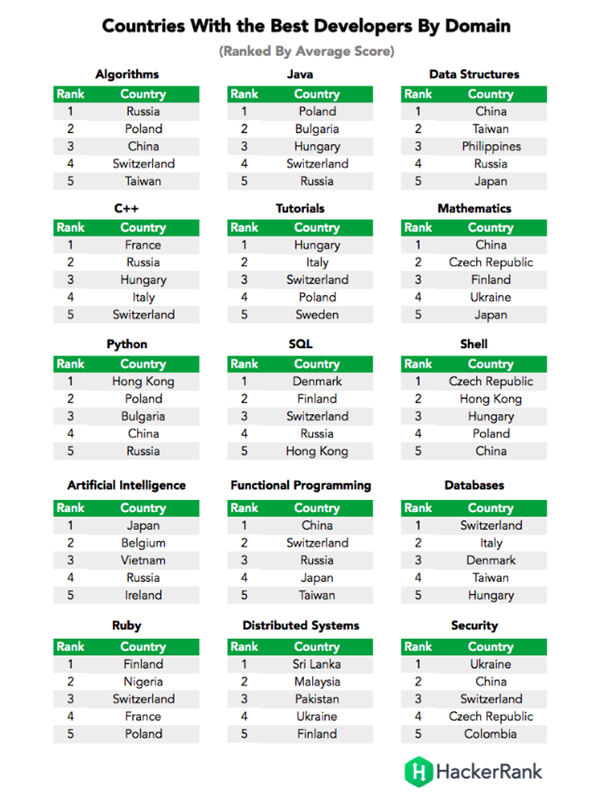 China performed well in several domains and beat developers from other countries in data structures, functional programming, and mathematics. Russia dominated in algorithms, the most popular test type. Poland and China bagged the second and third positions, respectively, in this domain.

HackerRank explains that the difference in performance levels of various countries could be due to the developers’ interest levels in participating in tests from different domains, meaning the Russian developers would have practiced more in the algorithms domain and the Chinese developers might have been more interested in the data structures area.

Countries Likely/Unlikely to Take Tests In A Specific Domain

HackerRank also compared how developers from each country divided their time among the various challenge types and determined their domain preferences to that of an average HackerRank user. According to them, this enabled them to find out as to which countries are more/less likely than others to participate in a test in a specific domain. 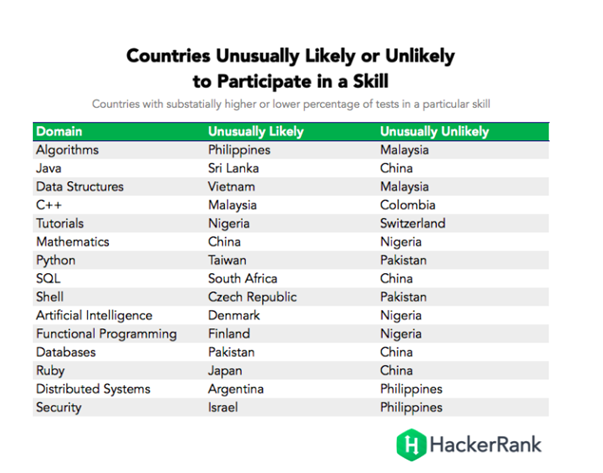 It is quite clear from the above table that Chinese developers took part in mathematics competitions much more than average developers did. This probably explains why they secured the top rank in the mathematics domain. Czech developers, on the other hand, preferred to partake in shell competitions more than those in other domains. They ranked at the top in the shell domain.

Apart from these two countries, there was little relationship between the preferences among countries when it came to participating and performing in challenges from specific domains.

The technology hiring platform HackerRank also determined the preferences of countries when it came to programming languages. 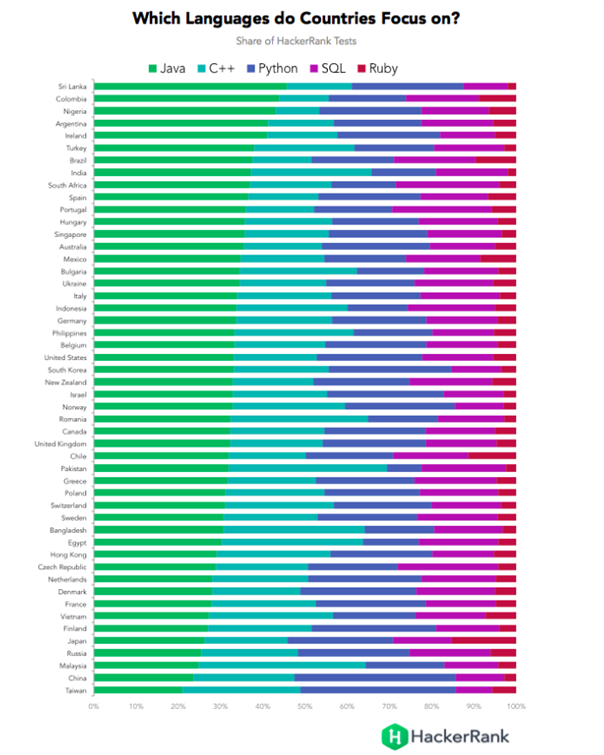 The above chart shows that, in general, developers from different countries participated in Java competitions more than the tests in other programming languages. However, a few exceptions were Malaysia, Pakistan, and Taiwan. Developers from Malaysia and Pakistan preferred C++, while those from Taiwan preferred Python. Sri Lanka topped the list because of its preference for the programming language Java. India, which supplies a large number of developers to HackerRank developers, came in at the 8th place.

Developers who give up on a test are given a zero score. Switzerland has the least number of developers that earn zero scores, making them the world’s ‘Most Tenacious Programmers’. 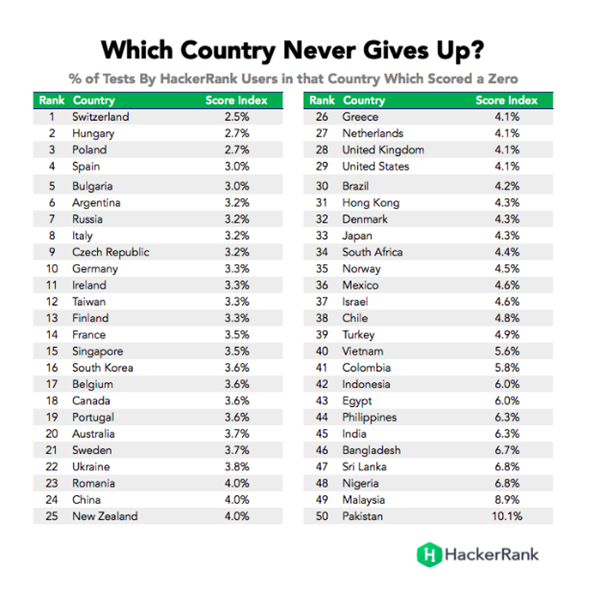 Developers from around the world participate and compete with one another, aspiring to make it to the top in the tech world. According to HackerRank, data collected and analyzed by them suggests that if a hacking Olympics is held today, the Gold, Silver, and Bronze medals would be bagged by China, Russia, and Poland, respectively. China certainly deserves the credit for making it to the top of the chart. The developers from India and the United States may have to put in a great deal of effort to be in the top 25 countries that offer the best programmers and developers.

However, the situation is not so gloomy for Indian developers in terms of work coming their way. According to a report published by the World Economic Forum, business outsourcing is all set to boom along with a change in the working environment. A report published by the Forbes magazine showed that the efforts put in by 50 percent of the population in developed countries such as the US, Canada, and Australia will not suffice to put systems back on track after the pandemic season comes to an end. Businesses will not be in a position to hire more local workers as higher operating costs would adversely impact their bottom lines.

In order to reduce costs and maximize profits businesses will be forced to outsource projects to developing countries where highly skilled workers can be hired at lower salaries. India is well placed to take advantage of this outsourcing boom because of the availability of a vast talent pool. In fact, many people from India are already involved in freelance work or offering virtual services and making decent incomes.

SayOne Tech, a technology company with offices in India and the USA, has proven expertise and experience in employing emerging technologies to deliver world-class, secure, scalable, and reliable solutions. The tech company strongly believes in empowering their clients to adapt to constantly changing business environments quickly and achieve their goals. The core values that SayOne is c passionate about are integrity, commitment, and transparency.