The Microservices architecture model consists of distributed applications that are deployed in different environments, maybe developed in different programming languages, and have different databases with many internal and external communications. Their popularity is indicated by the fact that in 2021, over 85% of respondents in a survey (large organizations with 5,000 or more employees) stated that they are currently using microservices.

This architecture model is dependent on multiple applications that are interdependent for end-to-end functionalities. Such a complex microservices system requires a structured testing strategy to ensure end-to-end (E2E) testing for any use case. In this blog, we attempt to discuss some of the most popular automation testing strategies for microservices using the testing triangle approach.

What is Testing Triangle

This method is a modern one and serves to test microservices with a bottom-up approach. This is part of the “Shift-left” testing methodology. By “shift-left” testing method is meant the pushing of testing towards the early stages of software development. Testing often in the early stages of the development it is possible to reduce the number of bugs and simultaneously increase the code quality. 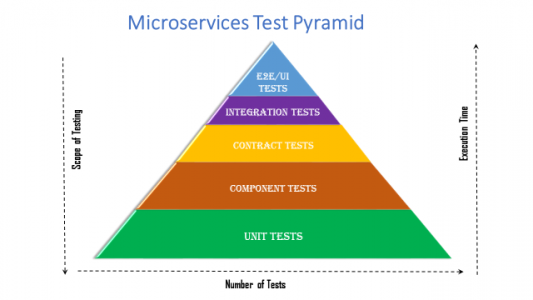 Multiple stacked layers in the test pyramid for microservices serve to identify different types of issues that occur at the beginning of the different testing levels. Therefore, in the end, there are likely to be very few production issues. Each test type focuses on a different layer of the software system and verifies the expected results. In the case of a distributed microservices application, the tests are organized into the following layers with a bottom-up approach:

A testing triangle is based on the following five principles:

The level 1 white box testing in the bottom-up approach is the starting point.  This tests a small unit of source code functionality and verifies the source code behaviour and methods or functions inside a microservice. This is done by stubbing and mocking dependent modules and the test data.

Application developers write out unit test cases for a small code unit (independent functions/methods) using different test data and then analyze the expected output independently without impacting other code parts. This is a vital part of the “shift-left” testing approach in which issues are identified at the beginning of the development phase at the method level of microservices. This testing has to be done thoroughly with code coverage of more than ~90%. This will serve to reduce the chances of bugs occurring in the later phases.

As the level 2 testing phase of the Testing Triangle that follows unit testing, this aims to test all the intended microservices functionalities and APIs independently in isolation for every individual microservice. The component tests are written for the highly granular microservices layer, and the API behavior is driven through tests from the client or consumer viewpoint. Component tests are designed to test the interactions between microservice APIs and services with the messaging queues, the database, and external, and third-party outbound services as a single unit.

As the level 3 testing approach, it verifies all the agreed contracts between the different domain-driven microservices. Contracts are defined before the development of the microservices in the API/interface, and these are designed as per the expected response for a given client request or query. In case of any change taking place, then the contract has to be revised. As an example, in case any new feature changes are deployed, then they should be exposed using a separate version /v2 API request, and we also have to make sure that the older /v1 version supports client requests for backward compatibility.

Do you want to migrate to microservices? Talk to us today!

Download our eBook for FREE “Microservices – A Short Guidebook”.

Contract testing tests a small part of the integration such as (1) between a microservice and its connected databases and (2) API calls between two microservices.

The level 4 testing verifies end-to-end functionality. As the next level of contract testing, integration testing helps to test and verify an entire functionality by testing all the related microservices.

Martin Fowler opines that an integration test exercises communication paths through the microservices subsystem to check for incorrect assumptions that each module has as to how to interact with its peers.

This is the final level 5 testing approach of the Testing Triangle. It is an E2E usability black box test that verifies if the entire system as a unit meets the expected business functional goals from a user/customer/client perspective. This testing is performed on the front-end UI or API client calls with help from REST clients. It is tested on the different distributed microservices and SPAs (Single Page Apps)/MFEs (Micro Front ends). It covers backend microservices, databases and their internal/external components, and UI testing.

Communication between multiple agile microservices development and test teams becomes time-consuming and difficult. When teams work in silos they may not share enough technical/non-technical details and this causes communication gaps.

All the microservices cannot be tested parallelly. E2E integration testing of inter-dependent microservices is a very difficult job as these microservices might not be ready to function in a test environment. Each microservice has its security mechanism and test data. It's a difficult task to find the failover of other microservices when their working is dependent on one another.

Frequent changes in business and technical requirements while in the agile development methodology will lead to increased complexity and, therefore, more testing effort. This increases both development and testing costs.

Databases may be of different types (SQL/NoSQL like Redis, MongoDB, Cassandra, etc.)  with different structures. The structured and unstructured data types can be combined to meet specific business needs. Every database contains a different type of test data in distributed microservices systems. It is not easy to maintain different kinds of test data for different databases.

Testing triangle provides testing techniques to solve many of the challenges associated with microservices. We have to choose the testing techniques with a view to lower complexity, allow faster testing, shorter time to market, lower testing cost, and mitigate risks before releasing the application to production.

The latest testing strategies test microservices on the cloud to find and fix the maximum bugs up to the highest testing levels and this is E2E testing.

Looking for the best microservices vendor? Give us a call today.

Why Choose SayOne for Microservices Development

At Sayone, we design and implement microservices systems that do not have complex architectural layers, and this enables the services to deliver exceptionally fast performance. Moreover, we provide services that are significantly decoupled, allowing you to launch independent services and not end up with the usual inter-dependent microservices that work more or less like a monolith.

We design the microservices keeping in mind the margin required to allow for the transitioning into the new system of your organization’s legacy architecture as well as expanding into the cloud system. Our microservices comprise lightweight code and we provide competitive pricing options for our clients.

Our microservices are built according to the latest international security guidelines that ensure complete safety of all the data. We also ensure that we deliver the services within stipulated deadlines and we always assure a quick turnaround time for our clients. Equipped with the best infrastructure and the latest tools and technologies, our expert developers will provide you with the best microservices that are easily scalable, enabling a good ROI in the shortest period of time.