Check out this article to learn about the different microservices architecture patterns and which one would be best for your application!

Top Microservices Architecture and the most Important Design Patterns

Microservices are becoming more popular by the day. According to a survey by Statista, in 2021, approximately 37 percent of respondents said that their organizations were making partial use of microservices. Large corporations have adopted microservices and become market leaders in innovation. For the newbies, microservices are all about splitting large software systems into smaller subsystems which are essential processes that can be independently deployed. Each of these services communicates via APIs. 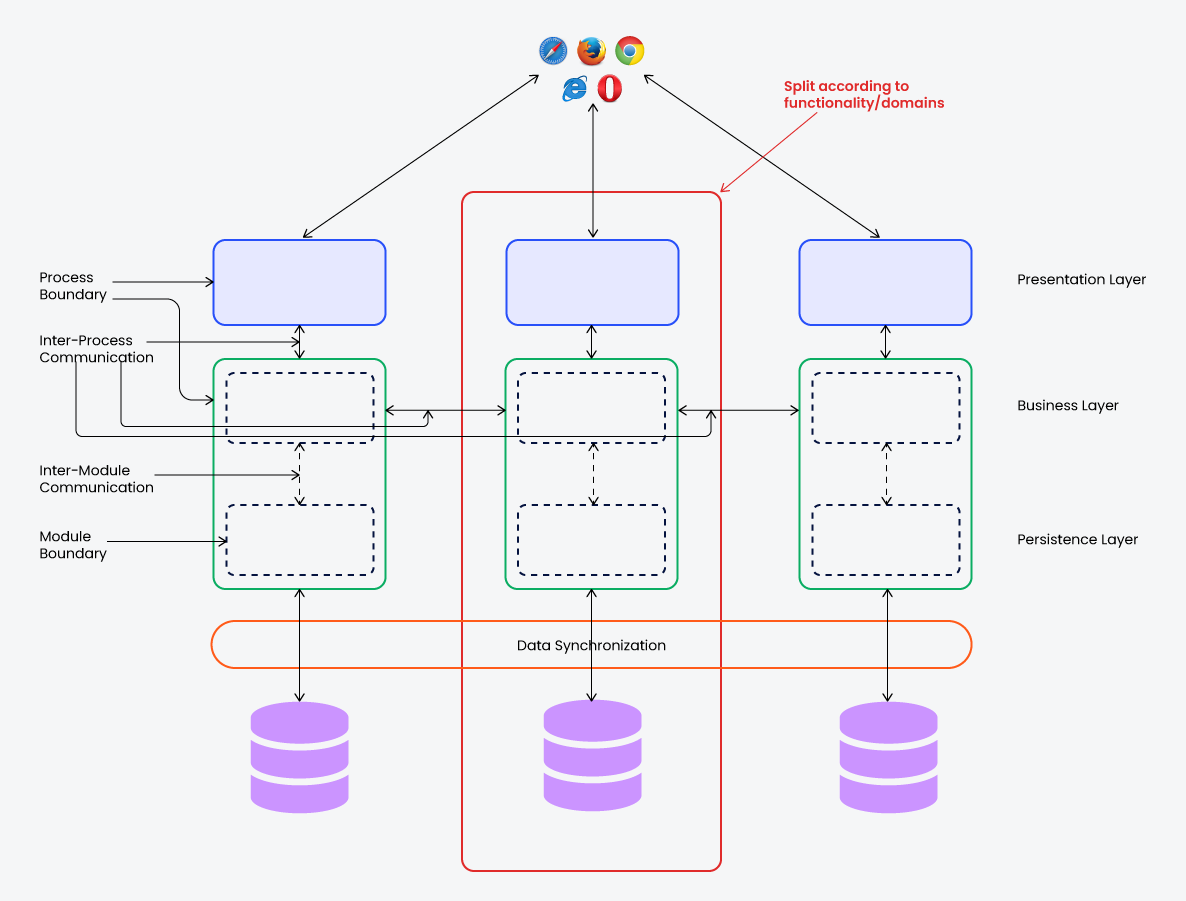 A key aspect to understand is when to use microservices architecture. Microservices works best when:

A better approach would be to provide one database to every microservice and this makes for loose coupling between the services. The term database may be misleading as the separate database only means logical separation of data, i.e., the services may share the same physical database but would be using separate collection/schema/table.

Read our Blog “Microservices Architecture – When and How to Shift”.

In a microservices architecture, when the design has a database per microservice, the services have to exchange data. For the system to be fault-tolerant, resilient, and highly scalable, they communicate asynchronously by exchanging events. In this case, to have atomic-level operations, you will have to update the database and then send the message. For SQL databases if you want to have distributed transactions (for high data volumes), two-phase locking (2PL) is not used because it does not scale. In the case of NoSQL databases for a distributed transaction, you may not be able to use 2PL (many of them do not support 2PL).

It is challenging to read from the event store in case event sourcing is used. To fetch a business entity from any data store, all the entity events have to be processed. There also may be different throughput and consistency requirements for reading/write operations.

In these types of use cases, it is best to use the CQRS pattern wherein the data modification (Command) part and data read part (Query) are separated. CQRS pattern’s two forms are ‘simple’ and ‘advanced’. Whereas in the simple form ORM models are used for reading and writing, in the advanced form, the read/write operations use different data stores.

If you set up microservices with a database per microservice design, then managing consistency by using distributed transactions turns out to be challenging. You cannot use the 2PL as it either does not scale as in the case of SQL Databases or is not supported by NoSQL databases.

Most modern business applications with microservices architecture have the frontend application separated from the backend applications and are decoupled. They communicate via APIs. For a mobile app client, you cannot use the same backend service as that for the web client. The API requirements are different for the two clients because of different screen sizes, performances, displays, energy sources, and network bandwidth.

The BFF pattern is used in scenarios where each UI gets a separate customized backend. This also has other advantages, such as acting as a facade for some of the downstream microservices, thereby reducing chatty communications between the said UI and the microservices. Also, in some cases, the BFFs provide higher security.

Download and read our ebook “Porting from Monoliths to Microservices - Is the shift worth it”.

Are you looking to outsource microservices development? Call us today!

In a microservices architecture, the UI generally connects with many microservices. In such a case, this condition gives rise to chatty communications. Many other concerns such as SSL termination, authorization, authentication, logging, throttling, etc., can arise in the case of large enterprises.

An API Gateway is then configured to send requests between the monolith and the new microservices. After complete migration to microservices, the facade is designed to intercept the client request and route it to the new service. After all, the monolith's functionalities are migrated, the existing monolithic application is decommissioned or ‘strangled’.

During synchronous communication in microservices architecture, one service usually calls others to fulfil specific business requirements. Such a call can fail due to transient faults such as timeouts, slow network connection, or temporary unavailability. Retrying calls can be used to fix the issue. However, when the problem is severe, the microservices may be down for a longer period. Retrying does not bring in results and precious resources may be lost in these conditions. Also, failures may cascade throughout the application. Failing immediately may not cause as much harm as this one.

Choosing the circuit breaker pattern is a solution for such use cases. One microservice should request another microservice via a proxy working like an electrical circuit breaker. The proxy works based on a count reflecting the number of previous recent failures. It then decides whether to proceed to allow the operation or return an instantaneous exception.

Every software application will have many configuration parameters for the different infrastructure entities such as the network, database, connected service addresses, certificate path, credentials, etc. Moreover, in an enterprise environment, the application is usually deployed in different runtimes (Dev, Local, Prod). This can be achieved via internal configuration, which is a known bad practice and can give dangerous results such as severe security risk if production credentials may be compromised.

With any change in configuration parameters, the application has to be rebuilt. This is a critical situation in a microservices architecture environment which may typically have hundreds of services.

It is, therefore, better to externalize all configurations. Here, the build process and runtime environment are separate. This helps to minimize the security risk because the production configuration file is used only during runtime or through the environment variables.

In the microservices architecture environment, many services are often developed simultaneously by different teams. These services work together to run a single business functionality and communicate with one another either synchronously or asynchronously. Integration testing of such microservices is not easy. TestDouble is usually used for faster and cheaper test runs. However, TestDouble does not often represent the real Provider Microservice.

Also, in case the Provider Microservice changes its message or API, then TestDouble does not acknowledge the condition. Another option that can be used is end-to-end testing. This type of testing is mandatory before production. However, this is a slow, brittle and expensive mode of testing and does not equal integration testing.

It is vital for any development team that wants to successfully adopt microservices architecture to follow a set of best practices. This in turn requires the selection of the best design patterns for a smooth and successful transition.

At SayOne, we offer independent and stable services that have separate development aspects as well as maintenance advantages. We build microservices especially suited for individuals' businesses in different industry verticals. In the longer term, this would allow your organization/business to enjoy a sizeable increase in both growth and efficiency. We create microservices as APIs with security and the application built-in. We provide SDKs that allow for the automatic creation of microservices.

Our comprehensive services in microservices development for start-ups, SMBs, and enterprises start with extensive microservices feasibility analysis to provide our clients with the best services. We use powerful frameworks for our custom-built microservices for different organizations. Our APIs are designed to enable fast iteration, easy deployment, and significantly less time to market. In short, our microservices are dexterous and resilient and deliver the security and reliability required for the different functions.

Start your microservices journey! Give us a call today!

There is no single answer to this question as the number of design patterns used in microservices can vary depending on the specific application and the developers who are building it. Generally, however, the most common patterns used in microservices include service discovery, containerization, circuit breakers, API gateways, service meshes, and message-oriented middleware.

An API gateway is an architectural pattern used in microservices applications to facilitate communication between clients and services. It acts as an intermediary between clients and services and is responsible for request routing, composition, and protocol translation. It provides a single endpoint for a set of services, provides security and protocol translations, and can provide additional cross-cutting concerns such as monitoring and rate limiting.

Spring Boot follows the Factory Method Design Pattern for creating beans. The Factory Method Design Pattern is a type of creational design pattern that uses factory methods to create objects. In Spring Boot, the developers create a bean factory that will contain the beans that need to be created, and then use the factory methods to create the beans. The factory methods are responsible for creating and configuring the beans, and the bean factory is responsible for managing the beans after they are created. This helps to keep the codebase organized and easy to maintain. Additionally, Spring Boot makes use of the Dependency Injection design pattern, which allows for the injection of dependencies into objects, making it easier to create, maintain, and test code.