In today’s disruptive tech world, Python and PHP are the two most-popular server-side languages in use. In many aspects, Python and PHP closely compete with each other because of its almost identical features.

In today’s disruptive tech world, Python and PHP are the two most-popular server-side languages in use. In many aspects, Python and PHP closely compete with each other because of its almost identical features. Their open-source benefits and productive features attract a majority of the businesses and developers to choose Python or PHP for app development.

A Brief History of Python

Developed by Guido van Rossum, Python is a general-purpose high-level programming language which was introduced in the year 1990. Due to its simplicity and ease of development, Python has become the developer’s best choice for backend development. Today, Python stands with 21k stars and 13k fans in GitHub.

A Brief History of PHP

PHP was developed by Rasmus Lerdorf as an extension of the C language. With 20k stars and 10k fans in GitHub, PHP powers almost 80% websites all over the world. During the initial days, Facebook also had PHP as its backend technology. Since its inception, the PHP team has been bringing continual improvements to ensure its robustness.

Speed
Speed is an important factor that determines the fluidity and performance of an application or website. Users discard websites that take more than three seconds to load.

The Python versions practice what they preach. With the Just-In-Time compiler in use, the code compilation process in Python is faster than PHP. The advantage is that files once compiled need not to have to be compiled again.

On the other hand, The previous versions of PHP such as PHP 5.x were much slower. It was only after PHP 7.x version was introduced, the speed of PHP applications improved significantly.

So, who wins this segment? Well, we can say PHP is the winner because of its new Zend engine 3.0. But, there is more to the story. In spite of the high-speed promises, PHP wins over Python only by a marginal difference.

Security
Your enterprise applications save crucial business data and user information. Hence, application security is uncompromisable. As both Python and PHP are open-source technologies, it is common to have doubts related to its safety.

PHP, on the other hand, has had some frightful history with its security. Although many of the security issues have been addressed and the community support is strong, it has not been able to defeat Python in terms of security.

A business application needs to easily adapt to the rapidly changing market trends and customer demands. Here, it is mandatory for the chosen app development technology to support businesses in the scaling up process.

In terms of scalability, Python apps are highly scalable and easily adapt the evolving trends. It offers high Artificial Intelligence and Machine Learning capabilities. On the contrary, PHP is less open to growing demands and new trends. Despite its continual improvement, PHP lags behind Python apps when it comes to scalability.

In this segment, we declare Python as the winner!

A popular programming language is expected to have more libraries developed by the programmers. These libraries ease time-consuming tasks and enhance the speed of application development.

The PHP package repository, Packagist, acts as a strong backbone for PHP developers. However, it does not offer the features and benefits the Python libraries. Python has the strongest library support along with some excellent built-in and third-party libraries. These libraries are easy-to-use and well maintained.

Python also provides machine learning libraries such as TensorFlow, Theano, and so on. Hence, entrepreneurs who are on their way to developing cutting-edge technology solutions can utilize the excellent Python library for development benefits. 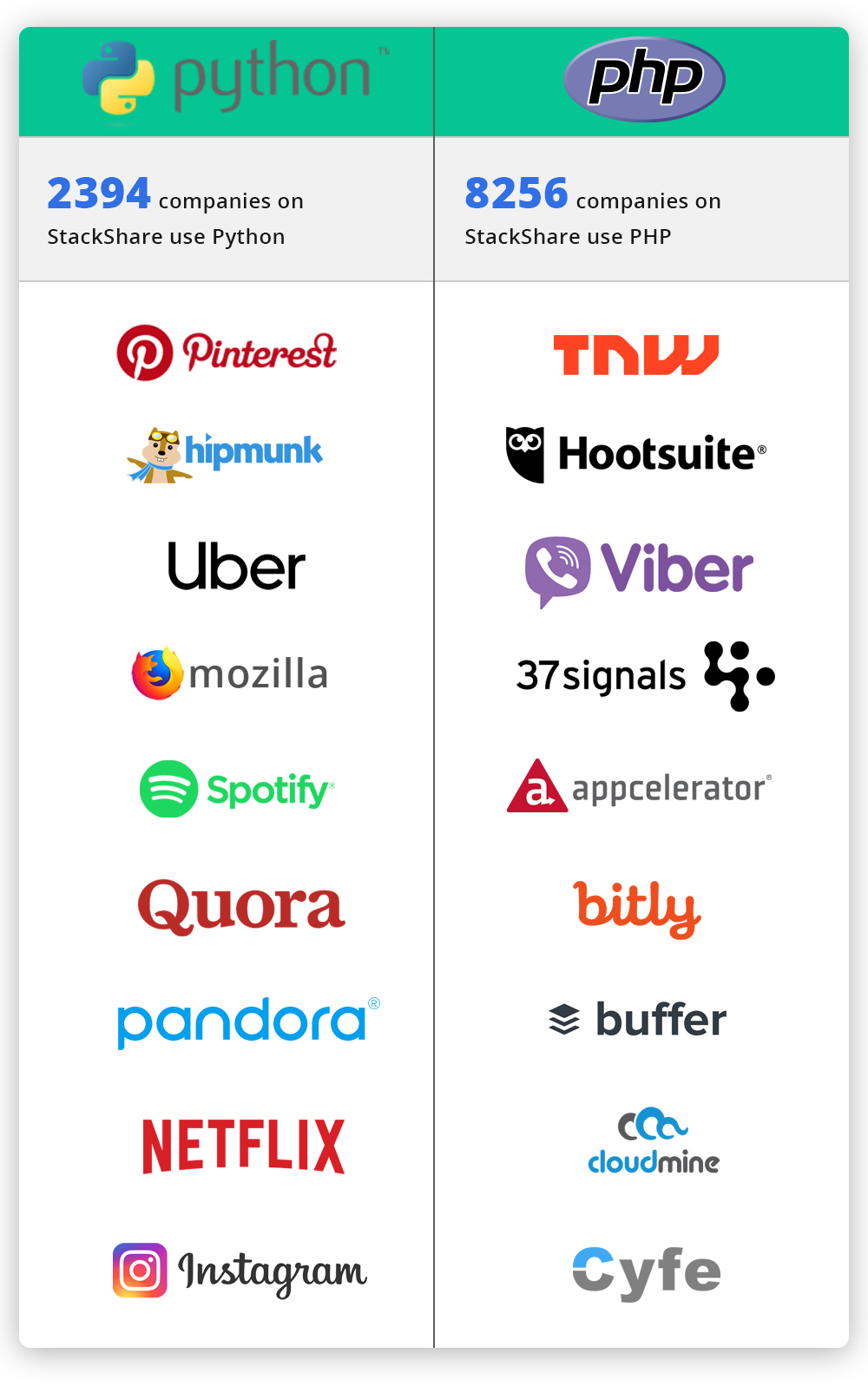 And the winner? As you can see, PHP ranks higher in terms of usage and popularity. So, its PHP this time.

Also read: How Python offers the Best Business Advantages in 2019

Bottom Line: The Programming Language to Choose in 2019

According to Stack Overflow:

“From 2016 to 2017, the year over year growth of Python in the US and UK market has been a steady 27%, much higher than the rate at which PHP has been growing”.

As you can see clearly from the above comparison, Python is a flexible, secure, and powerful technology offering businesses a wide range of opportunity. Thereby, Python is definitely our programming language choice for 2019.

Python is a versatile technology which is not limited to web app development alone. It is a general-purpose language with multiple capabilities. Python/Django development is, by far, the most strongest Python framework combination used to develop robust applications. For these reasons, we have always had Python as our backbone of application development. We have developed over 300 applications for customers all over the globe with a majority of the apps powered by Python.

Looking for web or mobile app development services? Get in touch for a free consultation! from our Experts.